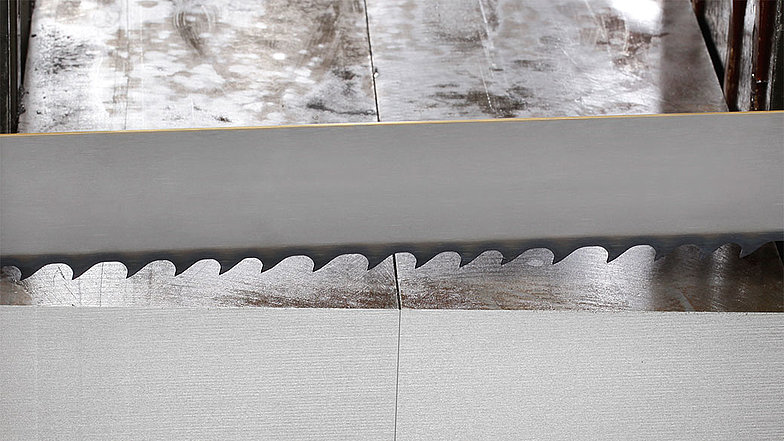 The High-Performer for Large Cross-Sections

In recent years, the number of cuts on large material dimensions in the sectors steel production, steel refine-ment, steel trade, system and machine construction, in the automotive industry as well as in big forges increased continuously worldwide. The materials to be cut range from high-alloyed tool steels, plastic mould steels and rust- and acid-proof steels to non-ferrous special alloys with cutting lengths from 800-2000 mm which are difficult to machine. Surfaces of up to 2,5 m² per cut implicate extremely long cutting times and are thus bottleneck for subsequent cutting processes. The machining of such big dimensions requires special bandsaws on the cus-tomer side and complex bandsaws in terms of operation – and not all band saw blades can cope with these spe-cial requirements.

In this context, performance, efficiency (cost per cut), precision, blade-life and finally process reliability are the decisive criteria for the tool on the side of the user. In order to be able to fulfil these specific customer require-ments in the cutting process, WIKUS-Sägenfabrik offers the market a highly efficient solution with the specially developed bimetal blade SKALAR®.

In the past, the reliable bimetal blade GIGANT® already convinced with high cutting performances and good lifetimes when machining large cross-sections. GIGANT® was available with the tooth shapes HV (highly quenched and tempered materials) and VA (rust- and acid-proof materials) for optimal adaption to the material range to be cut.

Due to the variety of the material range on the side of the user and different tooth shapes of the tool, a homoge-neous selection of the materials to be cut was necessary with the GIGANT®. In times of short delivery cycles, this requirement to change the blade confronted users and suppliers with immense logistical tasks.

Specially manufactured cutting edge geometry increases productivity
The bimetal blade SKALAR® combines the positive characteristics of both tooth shapes – HV and VA – without implying a homogeneous selection of the materials to be cut. This allows a universal use without performance losses and time-consuming set-up times in mixed operation.

The targeted combination of optimal set sequences and specially designed cutting edge geometry allows higher cutting performances [cm²/min], respectively shorter cutting times. The result is an increase of the machine availability as well as an increase of productivity and efficiency. 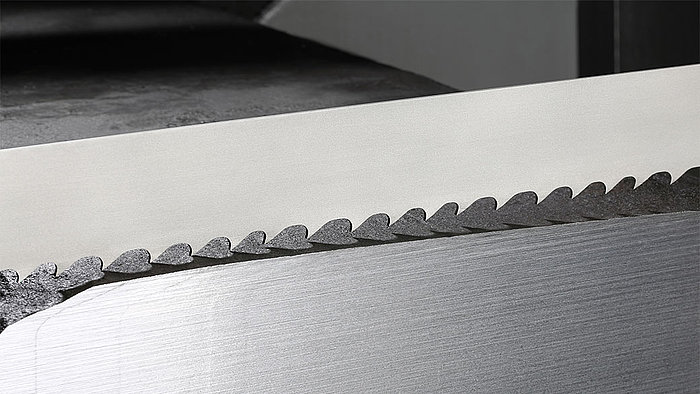 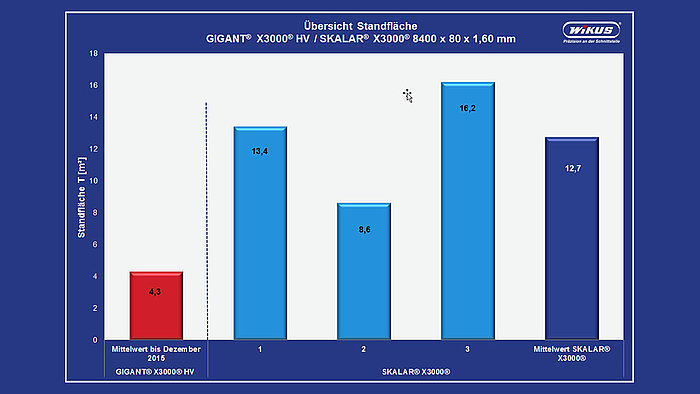 Nearly triplication of blade-life of the new SKALAR® X3000® compared to GIGANT® X3000®. This positive result was also able to be confirmed with other dimensions.

Buderus Edelstahl GmbH, Wetzlar: Considerable increase of productivity
Buderus Edelstahl GmbH with headquarters in Wetzlar ranks among the well-known German producers of high-quality steel. Different materials, such as fine-grained and engineering steels, case-hardened and tempering steels, plastic mould and tool steels as well as heat-resistant and high temperature steels are melted and pro-cessed. Especially forged products in the open die forge achieve block weights of up to 190t and have to be cut on huge machines in the process sequence.

Due to the enormous material spectrum and the necessity of high machine utilization at the same time, Buderus Edelstahl GmbH always had to make a compromise when using GIGANT® and cut different materials with only one tooth shape (HV or VA). This led to material-specific adjustments of the cutting performances P [cm²/min], fluctuating blade-life T [m²] and the mentioned delays in the production process.

In order to optimize this process considerably, the technical department of WIKUS-Sägenfabrik recommended the change to SKALAR® with the cutting material X3000.

Test results confirm higher cutting performances
Comprehensive tests were conducted on-site in order to confirm that the new SKALAR® actually leads to con-siderable improvements. Until that time, Buderus used the predecessor GIGANT® X3000® HV with 0,7-1,0 tpi of WIKUS and since that time they have used the new SKALAR® X3000® with the same dimension.

In the course of the first use on large cross-sections, the cutting performance of the bimetal blade SKALAR® X3000® was able to be considerably increased and the cutting time reduced further compared to GIGANT® X3000® HV. Furthermore, the GIGANT® X3000 HV wore out more quickly compared to the SKALAR® X3000, among others due to the tooth form which is occasionally not the optimal one.

The special coating of the cutting edge of SKALAR® PREMIUM M42 nearly doubles the blade-life and reduces the cutting times so that downtimes and blade changes are reduced which results in additional cutting capacities. This amortizes the higher price of the coated blade after a short time. 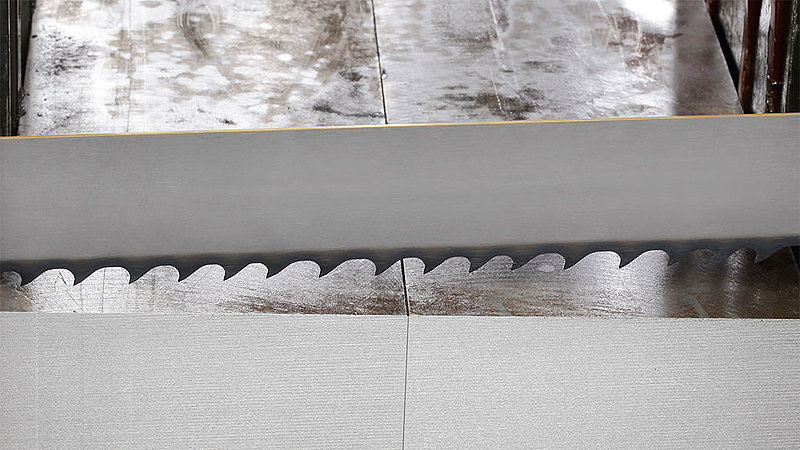 The High-Performer for Large Cross-Sections 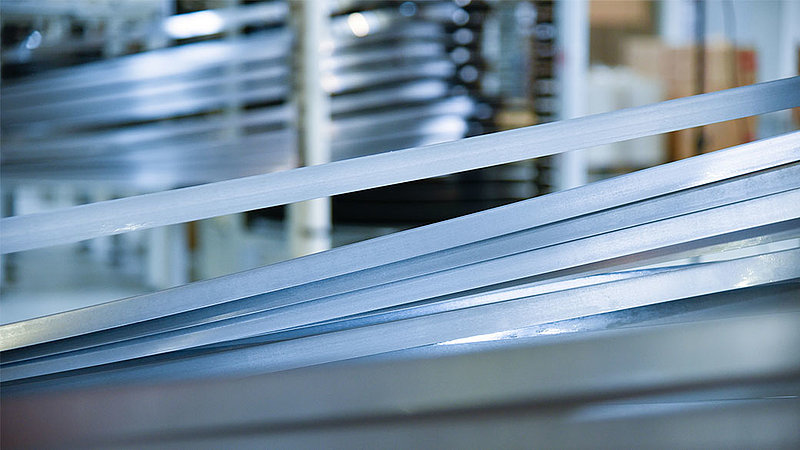 With the introduction of a new, highly modern process design for the production of some bimetal products, the technological leader WIKUS has once again managed to set new standards in the sawing industry. 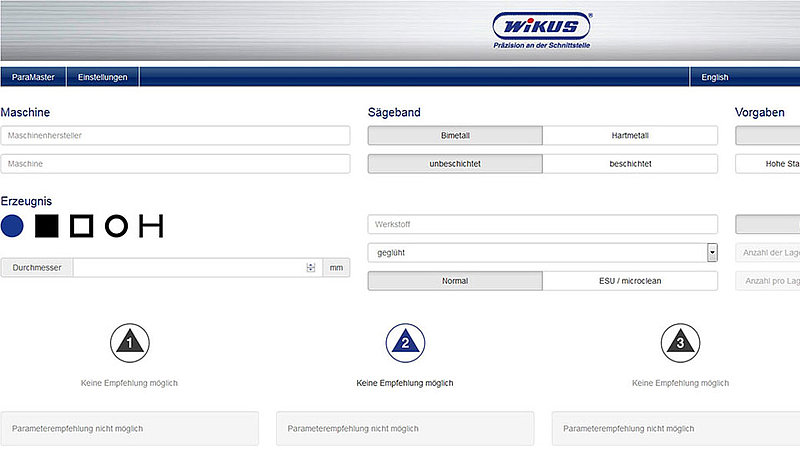 The resource time is an enormously important factor in the company and plays an important role especially for production processes. 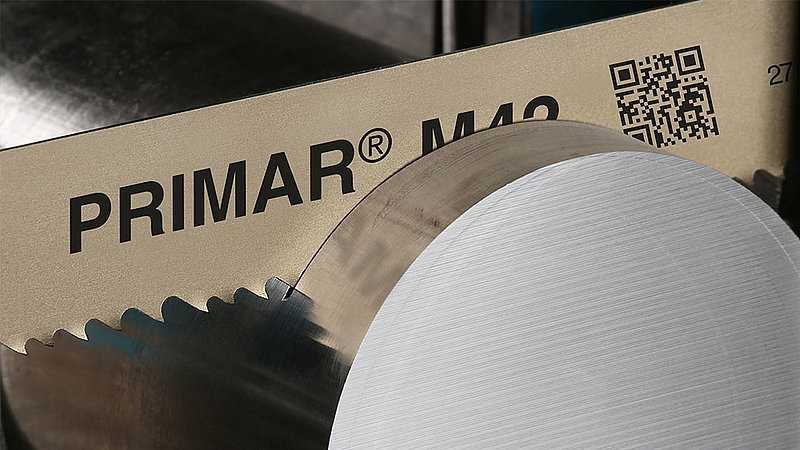 WIKUS saw factory will present its new PRIMAR® M42 bimetal band saw blade to the public for the first time at the INTEC International Trade Fair for machine tools, manufacturing and automation technology in Hall 2, Stand F34 from the 5th to the 8th of February 2019 in Leipzig.